I recently attended Blockstack Summit 2017. Here are some notes and ideas as inspired by the conference. 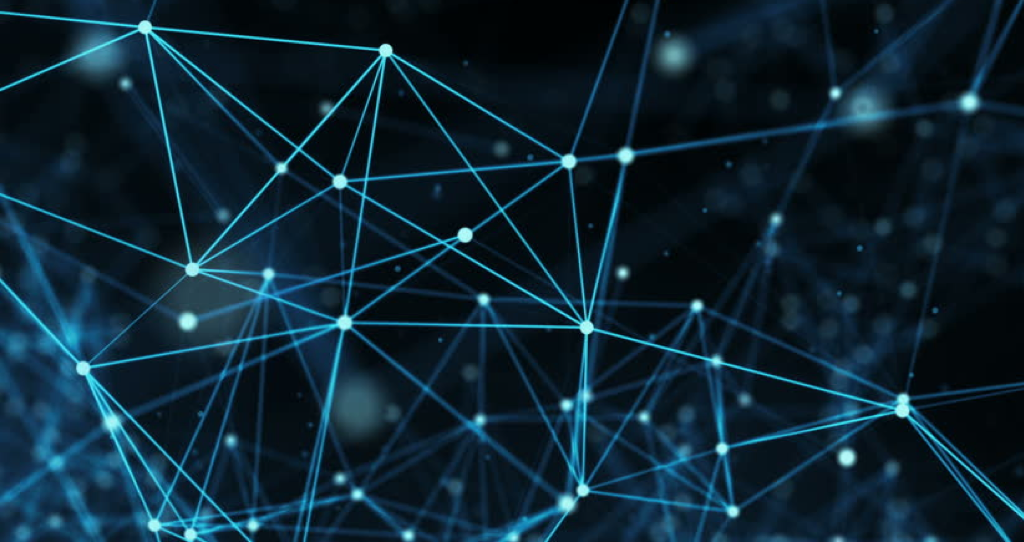 On the Benefits of Decentralization

What are cryptocurrencies uniquely suited for?

He then added: or for the unbanked.

Bitcoin is a global system. It does not recognize national boundaries. A human, or a machine, needs only a network connection to participate. This is why it is so well suited for providing financial services to the 2 Billion currently unbanked; people who do not have bank accounts, but who do have smart phones and an internet connection.

Naval Ravikant added other reasons for why decentralization is desired:

On user’s owning their own data 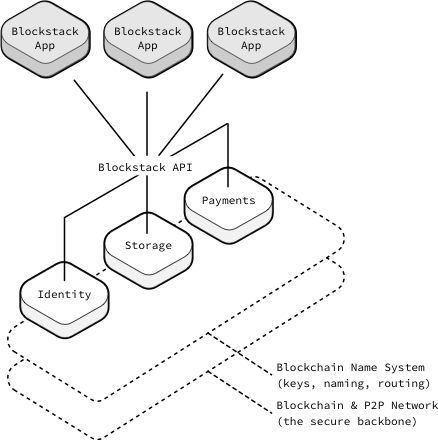 We are witnessing a Cambrian moment of experimentation in decentralized identity with projects like Blockstack, uPort, and ENS.

Identity will transcend borders. Over 1 Billion people who don't currently have an official identity (birth certificates, passports, ...) will gain access.

On public vs. private network effects

Ryan Shea, Blockstack cofounder, laid this out with an example: email has a public network effect. Everyone uses 'the email protocol' (i.e. SMTP). Regardless of whether you use the Gmail or Outlook clients, you will be able to communicate with everyone else using email.

Messaging on the other hand has private network effects. You cannot use your WhatsApp client to communicate with someone on WeChat.

Ryan made the point that public network effects will outcompete private networks effects. They are harder to build, but are vaster and more robust once built.

Naval talked to the same vision: the internet is going to be a giant decentralized grid. In this decentralized grid, there will no longer be an Uber or a Lyft, but the Internet’s one ride-sharing protocol. Drivers and riders will own their identities and reputations. And they will be able to use any overlaying client to access the global network.

You need to design a robust distributed system, build such that each node does not trust any other and can handle unexpected conditions, and account for economic incentives and game theory.

Moreover, it will be hard to push updates once you have shipped your original software and people have installed it on their computers. Juan Benet, of Protocol Labs, made the point that we need to future-proof our designs. For instance, a distributed file system like IPFS should have the ability to quickly upgrade the encryption algorithm and re-encrypt files in case an old method breaks.

The main business model for decentralized application has been to create a stand-alone token, own a certain percent of it as dev team, and work to help the network grow.

On this note, the Blockstack token was recently announced. Ryan and Muneeb have undoubtably been thinking hard about how to incent developers to build on top of Blockstack. As such, their three proposed business models are:

On blockchains bringing a new governance & incentivization scheme to networks

Naval Ravikant, Nick Szabo, and Albert Wenger alluded to this from different perspectives.

Naval said: blockchains are layering a meritocratic governance model on-top of networks. Refer to his epic Tweetstorm from a few weeks ago for more info.

Nick said: one of the core insights of blockchains was to transform an efficient but unscalable human process for trust, into an inefficient but scalable machine process. This is what the ledger's replication across every machine, and the flooding of the network with messages achieves. Refer to his blog post on social scalability for more info.

Albert said: social structures evolved through time to create different coordination & motivation mechanisms in how human beings work together. The four structures so far have been: the state, the market, the firm, and the network. The problem with networks is that they create monopolies, which lead to market power. A platform shift is the most likely way to overthrow the giant networks of our time (e.g. Facebook), and that’s what blockchains are.

It’s interesting that USV’s prior investment thesis was to invest in networks. Their 2004 fund, one of the most successful of all time, included Twitter and Etsy. We are now observing a reaction to that model. That's what successful VCs do: understand the latest paradigm shift, examine how it will change the world, and deploy capital to both profit from it and to hopefully help evolve the world into good direction. Networks are not all evil and are still orders of magnitude better than their older counterparts. Like Naval pointed out, social networks (like Twitter and Facebook) democratized voice, and enabled positive movements like the Arab Spring.

On the nature of teams, fundraising, and work

Naval believes that the existing VC model will be completely disrupted. The model is based on 1) access and 2) lack of liquidity. ICOs and tokens change both of those pillars.

Naval also alluded to the fact that most cryptocurrency teams are distributed semi-anonymous developers who get paid in tokens. I’ve experienced this first-hand and had my expectations changed on what’s possible. The future is already here, it’s just not evenly distributed.

The success of these fundraising and distributed team structures mean that the US, and particularly Silicon Valley, will begin to lose its singular position in tech.

Balaji gave a talk where he defined a metric, the Nakamoto coefficient, to characterize decentralization in a network. To improve something you need to first measure it. It’s a timely analysis given current discussions, and worth reading. 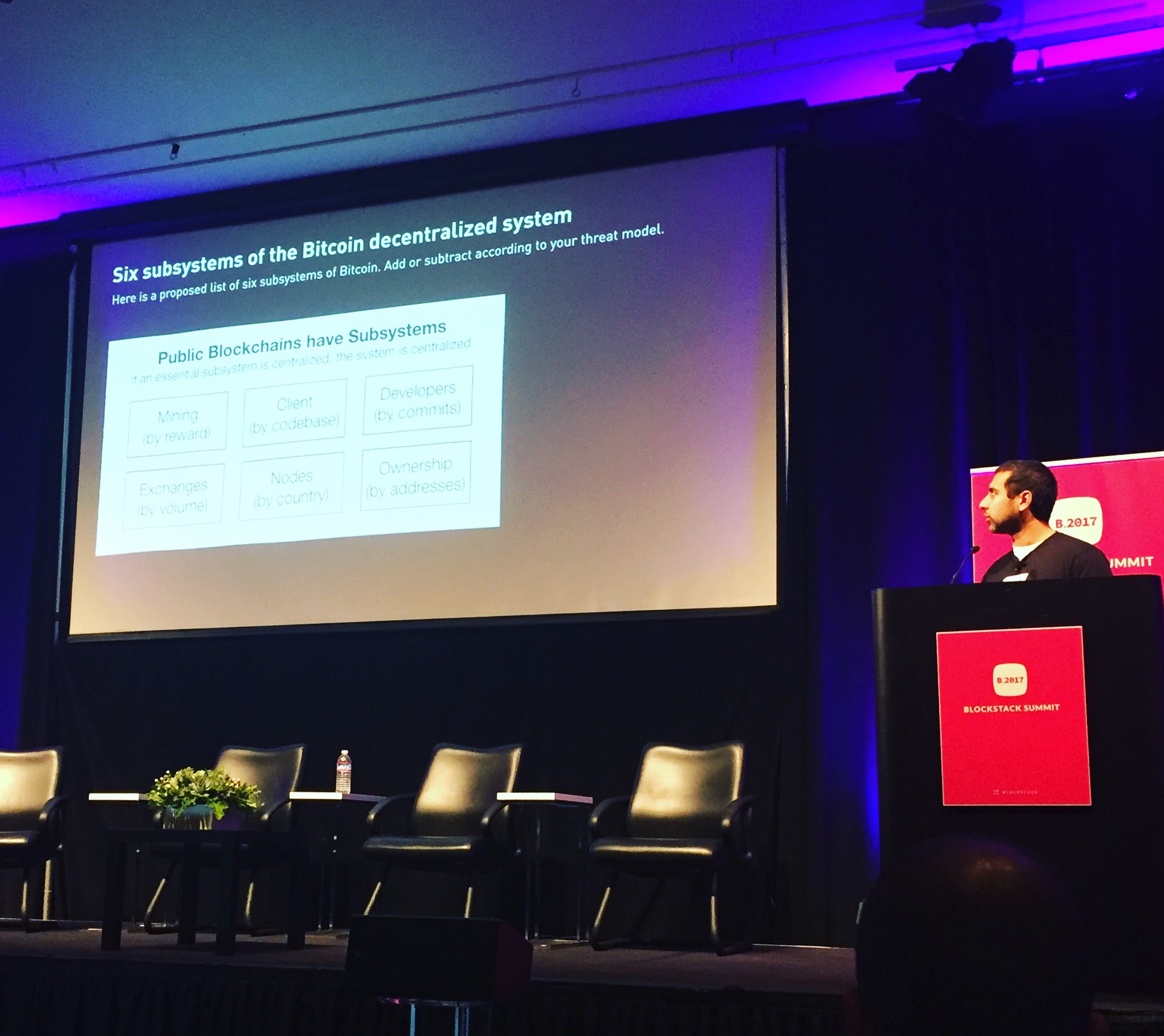 On the limits of decentralization

How much do users actually care about privacy & security? Given a choice on the spectrum between privacy and convenience, users have consistently picked convenience. We have shared more over time and adapted to less privacy (look at the initial controversy over Google Street View, the Snowden revelations and the relatively meek reaction, etc.). As an engineer (and someone who knows that our personal information, like our location and message histories, are available in a database for many programmers to query), I care deeply about privacy. But to what extent does the broader population care?

Then again, centralized networks have been adopted to this scale because there haven’t been good alternatives. What would you have used instead of Facebook? What about instead of Gmail? Thanks to tokens, decentralized privacy-centric services now have built-in financing and monetary incentives. These resources will lead to better applications and stronger network effects. Distributed, uncoordinated, open-source developers may find more optimizations than monolithic teams, and eventually build products that outshine their centralized counterparts.

Another unknown is how decentralized apps will learn from data. If each user’s data is encrypted and stored on different computers, the application layer will not be able to use machine learning to power the product. Is it possible to build decentralized products that compete with Discover Weekly, a curated news feed, or Netflix recommendations?

Finally, Albert Wenger pointed out another limitation of the token model: giving monetary value to something might suppress intrinsic motivation. This is a well-studied psychological effect. Steemit will be a good ongoing case study for this: will users share what they find truly interesting, or what they think will make most money?

We are early in a paradigm shift. We have discovered a new mechanism for organizing society and distributing value, but we don’t fully understand what’s going on. That's what makes it so exciting. It's easy to follow trends and chase the latest shiny object. In tech over the last few years, industry hype has followed anonymous messaging apps to blockchains to chatbots, with many others in the way. While these fields could have real merits, the truth